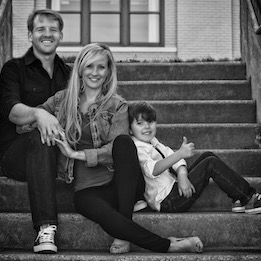 From East Tennessee to East Africa, God made a seemingly winding road perfectly straight: Jason and Ree’L Brotherton first met in kindergarten in Appalachia, then endured an awkward crushing stage as teenagers where they realized the other wasn’t so bad. Both attended East Tennessee State University and then pursued graduate degrees—medicine for Jason, business for Ree’L. While at medical school in Memphis, Jason first felt a calling to medical missions after meeting several mission-minded doctors at an inner-city clinic and making a trip to Sudan. Meanwhile, Ree’L was busy building her career as a business consultant. In 2007, after a decade of dating, Jason and Ree’L finally decided it was time to tie the knot.

God called Jason and Ree’L to Los Angeles, where Jason completed an Internal Medicine and Pediatrics residency at Los Angeles County Hospital while making short-term mission trips to Sudan, Haiti, Nicaragua, and Malawi. During that time, Ree’L took a six-month sabbatical from consulting to volunteer at the Union Rescue Mission on Skid Row. Six months lengthened into two years, and Ree’L began envisioning how she could use her skill sets for kingdom purposes beyond her secular ambitions.

In 2016, Jason, Ree’L, and their 7-year-old son Sylis moved to Chogoria, a rural town in Kenya about a five-hour drive from Nairobi, to work with the nondenominational foreign mission agency Serge. There, Jason is working at the Chogoria Mission Hospital supervising interns. He is the only licensed physician in an area serving more than 1 million people. Medical literature is in short supply, equipment and resources are outdated and limited, and most of the best local doctors move overseas. The Brothertons’ vision is to train local doctors, provide gospel-centered discipleship, and encourage them to stay to serve locally.

They are committed to serving in Chogoria for at least five years. They miss reliable electric power, the taco stands of East L.A., and Sundays at Reality LA, but handmade samosas and fresh-squeezed milk help alleviate the food nostalgia. Currently, Jason and Ree’L are hard at work in the hospital, engaging in medical education and administrative consulting, respectively. Sylis is attends the local school as the only ex-pat, which has not stopped him from quickly making friends.

Read about their mission journey at their blog.